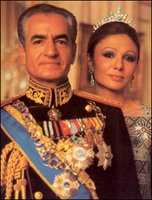 “My main mistake was to have made an ancient people advance by forced marches toward independence, health, culture, affluence, comfort.”

Perhaps, 27 years after his majesty's departure, many people including me believe that the Iranian people did not deserve the prosperity, happiness, secular education and the social freedoms under his reign.

The hard lesson of the damned Islamic Revolution of 1979 was to make every one of us to appreciate his majesty's hard work to modernize Persia, although it is a bit late now but his majesty's memories will remain among Iranian people for sure.

Too sad that many people helped overthrow the late Shah of Iran whose aim was to make Iran rise among the free nations of the world and introduce an independent nation to the world community.

Rest In Peace Your Majesty! Iran misses you more than ever!
Posted by Winston at 5:45 AM

It was a shame that the persian empire ended the way it did! Iran will never recover the amount of prosparity and freedon that they enjoyed under the Shah. For Iran it is too late to cry wolf because the wolf has already devoured the chickens

What a sad anniversary.

I personally do not regret the fact that he fell. To me he would fall anyhow at some point sooner or later (as we know he was damned ill, but there were other problems too).

What I regret is the way his regime fell. It was perhaps the first true radical regime change that Iran had ever witnessed since the fall of the Zandiyeh dynasty, which was ensued by a war with Russia that similar to Iran's war with Iraq was catastrophically damaging and disastrous; not to mention that it brought to power one of the most inept dynasties in Iran to power (the Qajars).

I think it would be appropriate to post a link to his last radio-televised message, at which he mentioned that he had heard the voice of the Iranian people's revolution and asked them to think over the serious consequences of a radical regime change!

Our parents' generation did not listen to him. They thought it was a ploy. Iranians are still paying for their 1979 radical regime change of Pahlavi to "god knows what". Alas, many lives have been lost. Many lives have been ruined. Many families have been destroyed since then.

I do not mean to offend your feelings, but he was partly responsible for it, not just because of his illness because he too became too confident, as you quoted him so aptly.

But one fact remains, he was a far less cruel despot than those who replaced him, and more forgiving of his enemies. He will be remembered for his hesitation in resorting to outright cruelty; I do not care this was because he was a coward, as some say, or because he was not as harsh as his father, as some other claim.

His legacy will remain the most disputed one in the history of Iran for many many years to come, and especially until the present handful are still in power.

Shahram, I understand your point and agree with you. Although I believe the Islamic Revolution in Iran was a big mistake and that the Iranian society under his majesty's reign would have become more free, democratic and just over the time.

But our parents [at least not mine ;-) ] werent aware of their own share in the destruction of Iran through their useless revolt and now all of us are paying the heavy price.

I also do not think that the Shah would have fallen eventually, but I think we could have had a better and more democratic society with the Pahlavi being in power today.