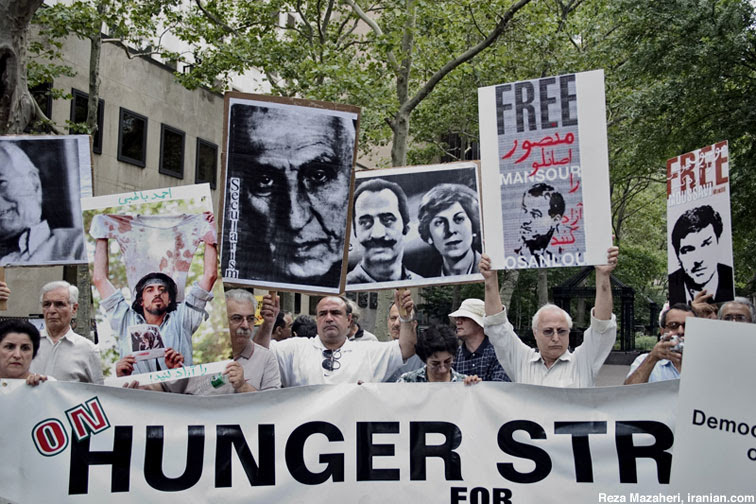 Iranian dissidents of all backgrounds and affiliations have answered Iranian dissident Akbar Ganji's call for a symbolic hunger strike across the globe to press the Iranian regime to release all political prisoners being held for their activities against the regime. These actions will catch the attention of the people of the world to the fact that there are lots of political prisoners inside of Iran.

Amir has reports of the New York city hunger strike in front of UN building. Azarmehr reports from London, UK. Shahram reports from Toronto, Canada, where a symbolic strike was held in downtown Toronto's Nathan Philips square as well.

Freedom isn't free is a web site dedicated to the Canadian supporters of this symbolic action and it is good to mention that Iranian.com has more pictures of the event in front of UN headquarters in NYC.

Although I have lost my respect for Akbar Ganji due to his personal political preferences but I'd rather stay with the crowd because I understand that these efforts are to press the Mullahs occupying Iran to release the political priosners and get the world's attention to the suffering of the Iranian people.

It's time to topple the Mullahs of Iran and help secure the mideast region.

Winston my stance on Ganji is similiar to yours...

He is a charlatan by saying that he supports democracy yet at the same time says he will not hold talks with Constitutionalists!

Most of the time what he says works against Iranian interests and on other occasions are plain out lies such as his recent comments that there are only 50 political prisoners in Iran!!!

I do agree that the current action does get the attention of the public but in the end will it be a positive thing for us? What if people start believing that there are only 50 political prisoners in Iran? What if they believe in his oxymoron statements that Islam is compatible with democracy? And as far as I know he is a proponent of "reform" not "change" unless he has changed that view in the last 48hours!!

I understand. Sometimes we must put aside our personal likes and dislikes to stand for what is right. It is right to stand with these political prisoners, since they have committed no crime. It does not matter who called the strike. Just that there is one. :)

Dear Aryamehr,
Those were not his beliefs when he was in Evin prison. He even said the religion had to get out of politics, or something like that. It was over half a year ago, so I don't remember exactly.

I am with Winston and you as far as his unwillingness to meet with President Bush. The president also fought for his release. Maybe it is because he will never be able to go back to Iran if he does?

Please see my post on the hungerstrike and my opinions on Ganji - btw only around 40 people showed up to the hungerstrike of which at least 5 which I know of where Constitutionalists (MashrooteKhahan) who wanted to check it out, the rest where leftists, republicans, and former islamist parliamentarian Elaheh Kolaei (sp?)...

As I said before...if you want to USE these charlatans in a way that would end up in the interests of the Iranian Nation by all means do so - HOWEVER it seems that people do not want to do so and that they have seen through Ganji...hopefully a GENUINE movement will soon be formed.